Sunday evening I had a little Super Bowl party at my place, and I actually used my new camera and took some pictures. Since most of the Ohio clan hasn't seen pictures of my place ever, you'll get a feel for what it looks like. 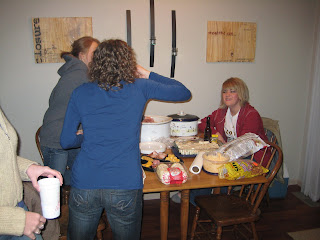 Yes, this is how mature we are. Jistin flipping off the camera. Nice. 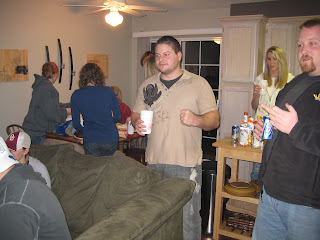 Another middle finger. Thanks Genz. 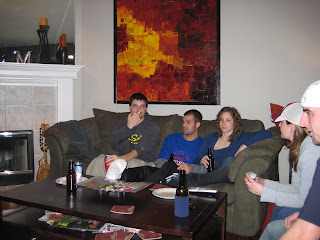 While Genz may have been rude with flipping the bird, he was polite enough to stick his ass outside when he had to fart. And yes, his wife was at the party, too. And no, this wasn't even close to the most innapropriate thing that he did all night. Let's just say I'm glad he didn't get ahold of my camera. 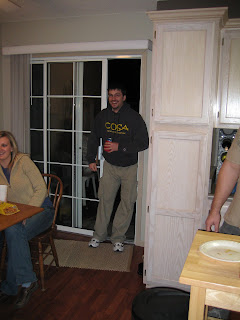 Here's what Woody Hayes thought of the game. I guess he's a Patriots fan. 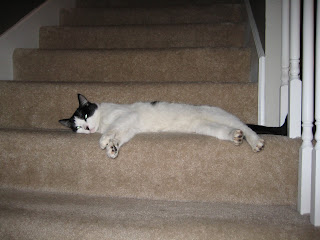 The ladies eventually decided to have their own little party in the basement. They were playing some game that involved having to name yourself after a vegetable and then rhyme with it. I didn't really get it, so I just went back upstairs and had more queso. 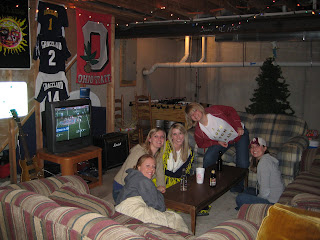 Another view of the girls, but I wanted to give a quick review of my decorating style for my party pad. From left to right: Stereo, Trash Can, Street Signs (no officer, I swear I just found them in a ditch), Cheerleader Calendar, Mounted Deer Head (usually it has a cigarette in it's mouth, but someone must have been reeeeeally desperate and stole it), Volleyball Jerseys (we were supposed to turn those in?), TV, OSU Flag, Foosball Table, Christmas Tree ('tis the season), and a gigantic inflatable Natural Light can. Not seen in the photo is the dart board, flip cup table, and the sump pump hole, which is more commonly known as "the urinal." **EDITORS NOTE** The Natty Light can was graciously purchased by my wonderful brother in law Carl for my b-day back in the day. He wanted a shout out about it, so here you go Carl. 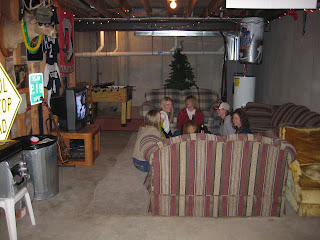 That's all for now, I hope everyone else had a great Super Bowl as well.

Sounds festive as usual! Glad you all had fun. You know I've always been a fan of your "eclectic" decorating style. I'm glad to see the Natty Light can is still being put to good use. Carl went to great lengths to get that for you!

Yeah, where's the love? You wouldn't believe what I had to do to get that for you!

Yeah, where's the love? You wouldn't believe what I had to do to get that for you!
Carl