Well, the boys finally decided it was time to enter the world, on the 4th of July no less. The two little firecrackers (both are redheads of course) came into the world at 3:33 and 3:40 am, weighing in at 5 lbs, 5 oz and 5 lbs, 10 oz. Mother and kids are doing well, and Carter is doing really well with them, too. Tristan is in blue and Tyler is in green. 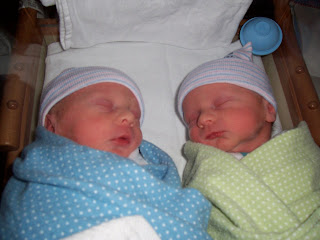 Presenting the entire Hoyt family. Man, they are going to have their hands full. 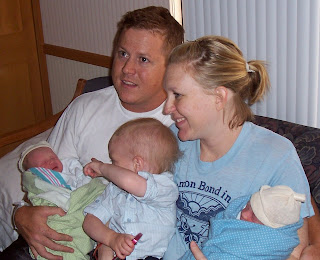 A few weeks back I went to Rockfest, a huge all day long festival put on by 98.9, the local hard rock station. I had actually bought a ticket, but at the last minute my friend/Howl boss Jake had a free ticket for me, plus passes to the 98.9 tent and the Miller Light tent. So I went for free, had free food and beer, and a special raised stage to watch everything from. The bands on the main stage were Another Animal, Trapt, Chevelle, Saliva, Sevendust, Shinedown, and the reunited Stone Temple Pilots as the headliner. Another Animal was blah, Trapt was really good but their sound equipment was messed up, Chevelle was awesome, we didn't pay attention to Saliva and just ate and drank, Sevendust pissed us off by not playing a single on of their hits, Shinedown rocked it, and Stone Temple Pilots were incredible.

I thought I'd start off with an edited version of a girl flashing. While there weren't as many boobs being shown as we thought there might be, there were still a few white trash ladies willing to show what their momma gave them to 50,000 people. Classy. 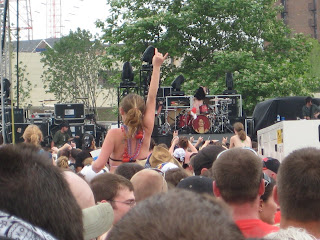 Jake (high schoo friend/boss/got us the free tickets and passes), Lugo, Minks (both high school friends) and me. This is at the 98.9 tent, drinking our free beer and standing on the platform so you could see over the crowd. 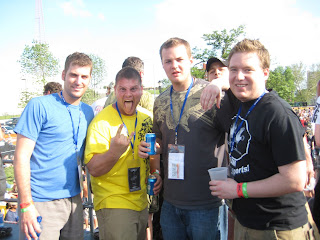 We all went into the crowd for STP, and Jake and I managed to work our way up to the second row. Here's their guitar player with the smoke and light surrounding him in a cool way. 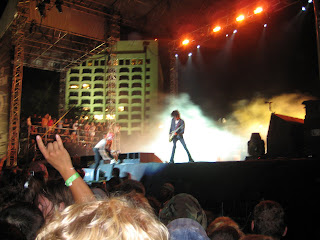 Scott Weiland, STP's lead singer and noted drug addict, towards the end of the set. The band sounded amazing live and I knew about 75% of their songs. They interact with the crowd a lot which is cool, but Weiland did sound amazingly strung out when he would talk between songs. 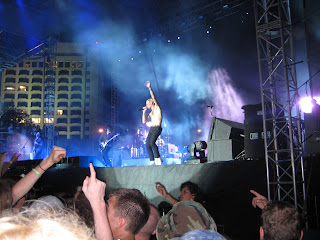 These pics are pretty old, but here's some pics of me and some of my boys out at Power and Light District, which is where I work for my side job.

From left is Killa (my summer roomate), me, Shane (college friend) and Lugo (high school friend). This is at Howl at the Moon where I work. 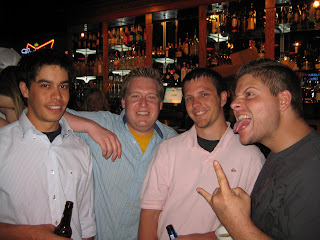 Here's a pic of the "Living Room" area of P&L. All of the bars form a giant courtyard in the middle that is covered by a huge roof. There's a stage where they have free concerts, and then different areas to sit as well as outdoor bars. It's cool because you can go down there and hang out and not even go into an actual bar. 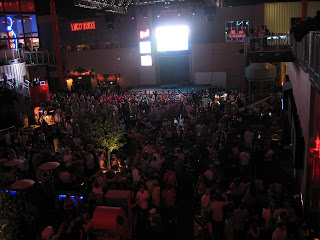 Here I am with Alex Gordon, future All-Star for the Royals. He's their starting 3rd baseman and was the number 2 pick in the draft a few years back (i.e. he's a multi-millionare). Anyways, he came up to the bar right next to me to get a drink and we chatted for a minute or two. He was a laid back guy, he was there with some of his friends from his hometown and his wife. He actually joked to me asking if he could order an 86oz bucket of Jack and Coke (we sell these buckets of girly drinks), and I told him I worked there and he actually could get one. After he placed his order I asked if he got one, he said no, and I called him a p*ssy. So yeah, I called Alex Gordon a p*ssy. I offered him a shot too, but he passed since he had a day game the next day. His exact response was "I have to play at 1 tomorrow, I'm getting drunk but not that drunk." GO ROYALS!!! Oh, and in the picture he looks wasted but he really wasn't, it's just a bad pic. 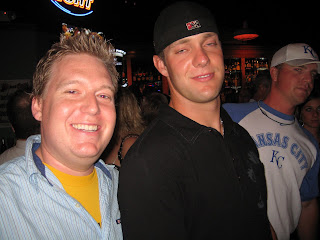 Once again, sorry for the delay in getting a new post up. It was End of Quarter at work, so I've actually been busy, plus the whole side job thing. Here's a quick update.
- So I've hit a new low in my life. Not only am I on match.com, I'm too lazy to even do it myself. My friend Laura just moved to Milwaukee with her husband, and she has a decent amount of downtime, so she is now officially me on match. That's right, she has my username and password and is now sending messages to ladies as me. I figure having a girl do it can't be any worse than what I was doing (since I got nothing on there), so I'll let everyone know how it goes. If anyone else has the urge to be me, let me know and I'll let you experience the wonderful world of online dating.
- My sister's pregnant with twins and is about to burst. Pretty sure all of you know that, but for some reason she wanted me to mention it. Happy now Katie???
- Eating a cheeseburger and onion rings at 1 am last night was a bad choice.
- On that note, I gotta go to the bathroom. I'll post some new pics soon.
Posted by Matt Mac at 9:18 AM No comments: