Here are a few thoughts and comments.
- So girl number three from the last post, Courtney, didn't quite think of it as a date on Monday. What was I thinking assuming that two single people going out to dinner and then grabbing a drink, all while I pick up the tab, would be considered a date? How foolish of me. In her defense, it didn't start out as a for sure date, we were going to do lunch, then happy hour, and then it turned in to dinner. She could have at least made the fake "how much do I owe" dinner comment, not like a would have let her pay anyways. So, that basically leaves me with no prospects right now. Back to failing at match.com or something.
- Two more signs that I'm getting old. First, I went on my annual float trip last week (pictures soon, I promise), but we actually couldn't float at all due to rain and high water. What scared me is that while I had a really good time, it wasn't the highlight of my year like in the past. I actually had a better time once some of us bailed and stayed at a hotel room on Saturday night. I'm not sure what's going on here, but I don't like it.
Second, I for the first time ever took off flip flops last night to put on tennis shoes for no good reason. I have literally never done that in my life. Hell, I used to wear flip flops when it was snowing outside and 4 degrees out. Pretty soon I'm going to be taking metimucel and yelling at kids to get the hell off my lawn. Although it does bug me when the neighbor kids park their bikes in my yard...
Alright, for those of you that don't know my good friend Pat got suckered in to getting married a few weeks ago. He lives in Atlanta now with his bride, so some of us made the trek down there for the festivities. The highlight of the weekend for me was when the maid of honor, a gorgeous, sweet, innocent little Southern Belle, was saying how much she enjoyed "fluffing" the bride's dress, making sure the train didn't drag, get bunched up, etc. Hearing this girl go around saying what a great fluffer she was was hysterical. For you ladies out there who don't know what a fluffer is, it's one step down from p0rn star. Look it up. Also, this girl looked just like Cameron from the Real World if that gives you a visual.

Here is a shot during the ceremony, with myself being the groomsman second from the right. I am actually down a step there, and somehow I was the second tallest groomsman. Not sure what that says about Pat's friends. Ok, so I know I'm used to RLDS churches that are made of aluminum siding and have a basketball hoop behind the pulpet, but this historical Catholic church had the creepiest crusifiction thing ever. Complete with fake blood. 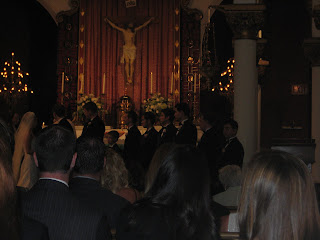 Here's Pat and I, and yes, I busted out the tuxedo t-shirt during the last hour of the reception. I don't think the bride found it nearly as amusing as I did, and I could possibly have been the first ever person to wear one during a reception at the Biltmore (this was a black tie affair). Also, note that in Pat's hand is "the breadball." What is a breadball you ask? Why it's a ball made of bread silly. To show our true maturity, a ball was made out of 4 slices of bread at breakfast and entertained the entire grooms side of the wedding party for the entire day. Once again, I don't think the bride was that amused. 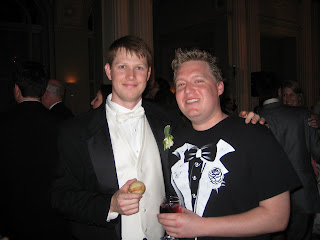 Here's all the guys from Blue Springs that made it down, Schicker, Tommy, Stout, me, and Jistin. 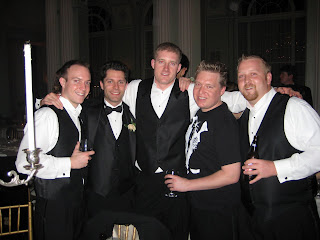 At about 7 am, I was coming back from dinner and noticed Pat's older brother Matt passed out in the lobby, still in his tux. Being the great friend that I am, I helped him back to the couch in my room. Since this is a family blog, I won't post the picture of me t-bagging him 5 minutes prior to this picture being snapped. 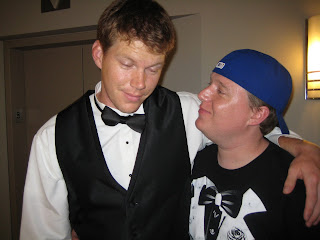 I Swear I've Been Busy

OK Folks, I want to apologize for me sucking at putting up new posts, but I'll try my best to play catch up and post a bunch of new stuff. I've been out of town for a wedding and then a float trip (where we weren't even able to float), plus I started my new side job, plus I've had multiple dates. No, that wasn't a typo. Multiple dates. Here's a rundown of what's going on in my life.

- My good friend from college, Killa (aka Adam Kalie-something really Hawaiian) moved in with me for a summer. No, I didn't play volleyball with him, and he's not actually from Hawaii (grew up in DC, and he's one of two Hawaiians in the country to play ice hockey, with the other one being his brother). Anyways, I'm cutting him a deal and only charging him $100 a month because he's still in school and is paying rent at his place in Lamoni. I bet you have a few questions, like "is he your age Matt?" Yes he is. "Oh, is he working on his doctorate" No. As the quote from Tommy Boy goes, "A lot of people go to college for 7 years." "Yeah, they're called doctors."
- I started my job at Howl at the Moon, working twice a week. It's actually pretty fun, and they have really tight security at the Power and Light district, so my job's pretty easy. But man are drunk people dumb and annoying. I'm glad I know I'm not like that at all when I go out. Right?
- On to what you all have been waiting for...I've gone on a plethora of dates lately!!! OK, so one wasn't even really a date, as she was gracious enough to let me know ASAP that we "should just be friends." Lame. But I had the honor of paying for a nice meal out, then taking her home right away and not even getting a kiss because she "didn't feel that great." Even lamer. And I can't even say her name, as she is a blog fan. But you know who you are out there!!!
Date #2 was a blind date set up by the semi-crazy (in a good way) photographer from my sisters wedding. Long story short, I saw her at another wedding and we chatted, she found out I was single and wanted to set me up. Things started OK on the date, she was a cute redhead, but man, this girl would NOT shut up!!! I consider myself a talker, and I couldnt' get a word in. All I heard the whole time was "blah blah blah", and then she would wink to emphasize points, which is creepy and annoying. Well, my friends said to give her at least a second date, so I texted her a few days later, and what did she write back? NOTHING!!! B**ch, I didn't like you anyways, and now it looks like she has the upper hand. She did have really nice shoes, though.
Date #3 just happened last night, and it was random as well. I had to get a new badge at work, and it turns out the lady that does that is my best friend from HS Drew's (he lived next door to us and was the bass player in the David Cook Band) fiance's best friend from HS. To recap, her best friend from HS is engaged to my best friend from HS. Anyways, we had met before years ago and started talking on work IM, and actually went out. She seems cool and is beautiful (tall, skinny, dark curly hair, dark brown eyes), as well as having a loud laugh which I find makes her confident. The highlight of the night was us going to a dive bar for a post dinner drink, and the wasted lady next to her who may or may not have been homeless talking to her about masterbation and soap operas. Not joking. Hopefully we'll go out again, I'll keep you posted. **EDITORS NOTE** Date #3 (Courtney) is also good friends with a girl that works at Howl, who is dating my friend from HS/boss Jake. Small world. Also, in the post a few months back where I wore my volleyball medal out all night? It was Courtney's bday party that night at a swanky place, so that's why we went next door to drink and do oyster shooters. Even smaller world.