- Comcast. After a year of my cable not working correctly, I finally am on The Dish Network through AT&T. But not before The Dish had to come out 3 different times to install everything due to things that Comcast screwed up. I'm now paying less and am getting more channels plus DVR.
- Sarah Palin.
- Sarah Palin's accent.
- Sarah Palin's slang.
- Everything that comes out of Sarah Palin's mouth.
- People that hated Hilary Clinton because she was an outspoken female but like Sarah Palin because...well, I have no idea why anyone likes Sarah Palin because everything she says doesn't make any fucking sense. You betcha!!!
- People that chew with their mouth open, especially when you sit in a cubicle 10 feet away from me and constanty chew on vitamin drops.
- Women that are constantly cold. I may have bitched about this one already, but I hate it that much. First off, all you eat is two salads a day with fat free dressing on the side(that you don't finish anyways) and a bowl of soup. I should say a bowl of broth because you don't even eat the good stuff. If you had more than 4% bodyfat you'd be warmer. Your not cold, you're semi-Anorexic. Second, you're wearing a short sleeve blouse that is so thin I'm surprised you can't see nipple, as well as a skirt and heels. You know what? Eat a fucking hamburger and put on a sweater. Until then, shut the hell up.
- People that send political emails where there is nothing cited and the text is in some bubble, cartoonish font. Yeah, base your beliefs on something that looks like it was typed by a 6th grade Hannah Montana fanatic. Oh wait, you already have your beliefs and just cling on to anything that looks like it may back you up, even if it's all made up shit. Hey, did you hear that Obama is going to take the oath of office on the Koran? I also got an email where there cited their stuff from Wikipedia. You know, the online encylopedia that ANYONE can edit. By the way, every single one of the emails has been in support of McCain. Republicans - actuall brain use optional.
- Sarah Palin.

Alright, there's my rant of the day. I'm doing some Halloween parties this weekend, and then have quite the week following that. Tuesday I'm hanging out with Tommy Brooks while we watch what unfolds with the election and then hit the town, Wednesday I'm going to Lamoni to hang with Killa and go golfing, and then Thursday I'm driving over to hang with the Hoyts. I'll have plenty of pics from the fun filled week.
Posted by Matt Mac at 2:25 PM 4 comments:

Last weekend I made the trek out to Nashville, TN (there is a Nashville, Indiana, so I'm just clarifying) to meet up with ol' Pat Lewis. Pat lives in Atlanta now but went to school at Vanderbilt, and this is the second year in a row we've met up for a 48 hour bender, er...I mean a nice relaxing guys weekend. He always has a free hotel room from rewards points, and I've always used a free flight on Southwest, so we are able to do NashVegas on the cheap. We just so happened to pick the weekend of the Auburn vs Vandy football game, which ended up being the biggest win in the Commodore's history (which is kinda like taking first place at the special olympics...which is a reference to one of my favorite jokes...man, i'm an asshole and am going to hell).

At any rate, after arriving on Friday night we dropped our stuff off at the hotel and headed down to music row. Below is the first bar we went to, and no it is not an actual double wide trailer, but it does look like one. It was cool but they tried a little to hard to be all white trashy. They did have cheap pitchers of PBR though. 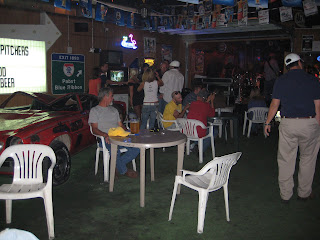 We soon headed over to The Stage, which is one of the famous music bars in Nashville. We chilled on the balcony area and met this couple which were cool as hell. Me, Pat, and Bill (one of Pat's college buddies that I know pretty well from when I stayed with the two of them in London for a week back in '03) where pretty much being huge pervs and were just trying to look down girls tops on the lower level (once again, I'm going to hell) when these two caught on to our game and decided to help us out. We ended up hanging out with them most of the night and even ran into them the next day. They were actually from Cincinnati, so that was cool. 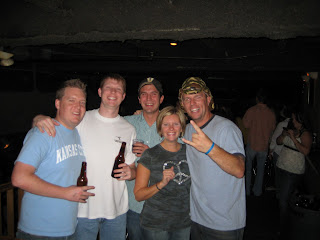 We ended the night at some Karaoke bar where 1) I almost got kicked out for spitting on the floor, 2) We shared a table with a bunch of 19 year old ladies who didn't look a day over 16...ah college, and 3) There was this random middle aged man passed out cold. 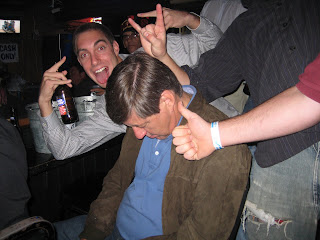 On to Saturday, and this is what our sink looked like at 9 am. Because of the sink becoming a cooler, I used the tub faucet to brush my teeth. Pat? No, he just spit in the ice, so we had used toothpaste spit all over the beer. Ah well, i guess getting whiter teeth while you drink isn't too bad. 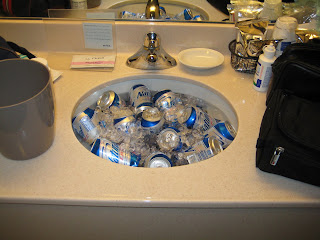 Around 11 we headed over to Sam's, which is my favorite bar of all time (which is saying something). I won't even try to describe it because no words can describe how cool it is. Here is our breakfast of champions. Although Pat's yeast infection started acting up and after two drinks we headed back to the hotel for a quick nap. Pussy. 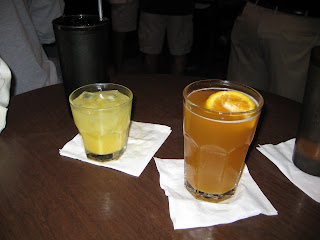 This is around noon. At a bar. 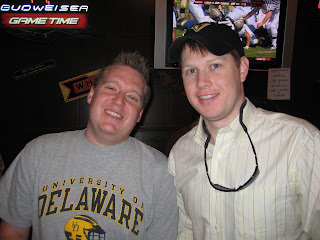 After the nap we headed down to campus for some tailgating action, then headed back to Sam's to watch the game. The Ohio State game was on the big screen next to the main big screen that was showing the Vandy game, so that was cool. Anyways, here are two signs that were at a tailgate we passed, which was the Top 25 Signs Not Seen At Gameday (yes, ESPN College Gameday was in town). Click on the pic to enlarge. 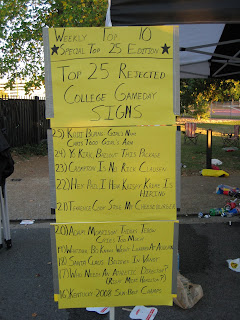 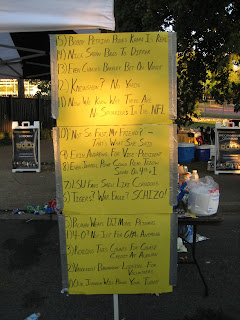 Here is a picture of our second home for the weekend. 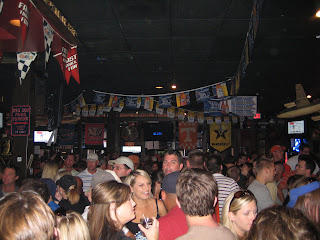 Here we are with random middle aged woman that bought us a shot. No idea what her name was, but she was taking Patron shots by herself so I selflessly offered to take one with her (she bought them of course). Turns out her daughter is a freshman at Vandy, so she couldn't come out to the bars. Anyways, she then started talking about how her daughter is called a prude because she isn't randomly hooking up with guys, and she was saying her advice to the daughter was that vibrators are better than guys anyways. Yeah, it was kinda akward. 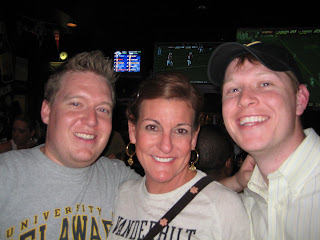 This is the last picture of the weekend, and I honestly don't remember why Pat had his shirt unbuttoned. 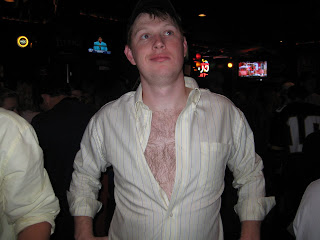 All and all it was an awesome weekend, and we are already planning on what weekend we are going to do it next year.
P.S. I know you all are wondering what the joke is, and it is...What's the only thing better than finishing first at the special olympics? Not being ret..... ok, I can't even write the rest of that, I'm not even that crude. But you did chuckle. Once again, I'm going to hell...
Posted by Matt Mac at 2:01 PM 3 comments:

- I have pink eye. What adult gets pink eye?
- I have multiple canker sores that hurt like a mother farker. Why the hell do I get them so much?
- My chest and back still feel weird from when Genz punched me almost three weeks ago. I did get x-rays and nothing was cracked, but I think I need to go to a chiropractor.
- As you can see, I'm falling apart.
Posted by Matt Mac at 7:03 PM 5 comments:

I'm sitting here at work, and I thought I'd write a little update since I just wrapped up the end of our quarter, I haven't taken a lunch break in a few weeks, and frankly I don't feel like working for the last few minutes that I'm here. Crap, my boss reads my blog on occasion I think. Just kidding Melissa, it's 10 at night and I'm online running some orders through!!!
- Well jailbait is already out of the equation. I confirmed that she is indeed 19, turning 20 in December (Fish thought she was turning 21 in December), and then a few hours later Fish found out that her type of guy is "tall, skinny, blonde, drives a truck, and chews Skoal." Um....I'm 5'10", have a double chin, tits bigger than some girls, drive a '99 Camry with a dent in the front bumper from hitting the worlds largest Racoon (I swear it was the size of a Golden Retriever), and the closest I get to Skoal is Big League Chew. Thinking about it all from a sane point of view, this is probably for the best though. Seriously...19. I am going to a HS soccer game tonight, gonna scope out some of the babes. 17 is legal in Missouri.
- Calm down everyone, I'm totally kidding. I swear. That's gross.
- The Royals didn't finish in last place. Holla!!!
- I pretty much quit Howl at the Moon. I work through October 18th and then I'm done until May when volleyball is over, but I doubt I'll actually go back then. I at least say I'm going back so I can get the employee discount for longer. It was fun while it lasted, but I never got to beat anyone up, so I've still never been in a fight. Damn.
- For all of my blog fans out there, I found out one that I think even tops mine. It's done by Robyn Bradshaw, who is a good friend of Carls, and it's about her returning to the dating scene after an 8 year absence. It is truly hilarious, and it has inspired me to step up my game. Check it out at http://thelifeandtimesofadateslut.blogspot.com/
- Apparently her last name isn't Bradshaw, but I've never seen Sex and the City (I may have some gay tendancies, but that is not one of them) so I didn't get the joke. I invited Robyn on a date here in Kansas City, and while I know that is doubtful maybe something will work out when I'm in the QC next. She recently did a list of Pro's and Con's of guys she's gone on dates with, so I will save her the hassle of making a list about me and do it myself. Since it is "late" and "i'm going to bed soon (leaving work)", that will be my next post. The new and improved "Why You Should Date Me (And Also Why You Shouldn't)."

P.S. The new colors are because baseball (Royals) season is now over and I'm full time back into football (THE Ohio State University).
Posted by Matt Mac at 4:27 PM 6 comments: