So my Mama Sue recently started a food blog, The Faithfull Foodie http://faithfulfoodie.wordpress.com/, that is becoming quite popular and she is having a great time doing it. This inspired me to do a food post on here, although since I'm much lazier than my mother, I'm only doing one post not an entire blog, and wont' post the recipe unless anyone asks for it. But other than that, it's just like The Faithful Foodie. Well, my language and jokes I'm sure are a little more coarse as well. But I digress. I recently had my first crop of jalapeno's from my garden (do not ask me about my tomatoes, or what are really just tomato plants since not one friggin' tomato actually formed), so I decided to make some Jamaican Jerk Pork for my sweetie. OK, so my sweetie is just my roomate Killa. But it is his favorite meal.

Here are my first 6 beautiful jalapenos. Actually, they are numbers 2-7 as there was one early bird a few weeks ago that I ate with some cheese and crackers, but I consider that just a test run. Aren't I such a green thumb? 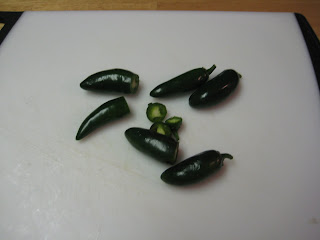 I probably could have bought these at thre grocery store for about 18 cents... 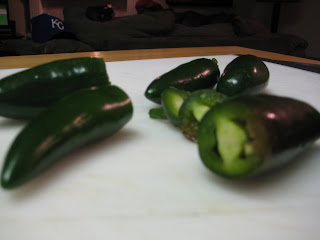 Here's the batch of the jerk sauce/marinade. Yes, it makes a ton, so you just have to have a lot of meat to marinade, plus save some for a dipping sauce. 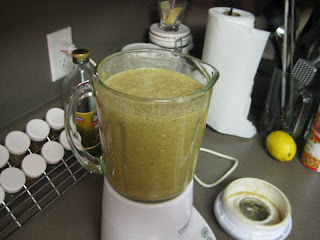 Since my recipe for the marinade makes an entire blender full, I decided to go all out and get 8 pounds of meat. I've done chicken in the past but wanted to mix it up a little. Plus pork was on sale. So I bought 8 pounds of pork chops you ask? Hell no, that's for suckers. I got an 8 pound pork loin and decided to do the butchering myself. Here I wanted to have something next to "the loin" for comparison's sake, so here's Woody checking things out.

I can't tell if he wants to kill it or make love to it. 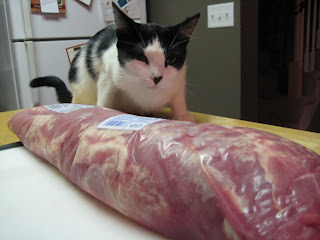 It got even longer once it came out of the package. That's what she said... 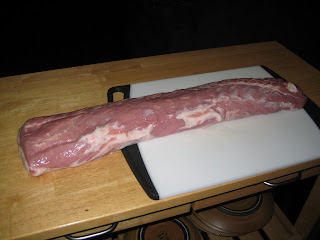 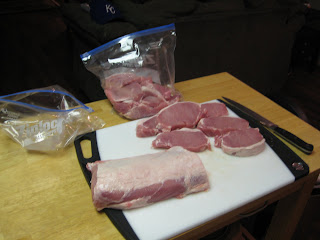 After marinating overnight and grilling over medium heat, here's the finished product. 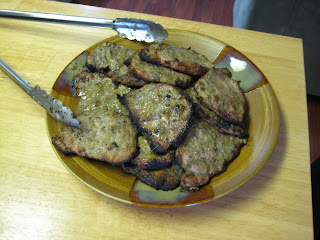 So I totally just had a revelation. How can a white boy like me from Missouri (pronounced Mizzeruh so it sounds trashier) cook such good Jamaican food? Because my all time favorite movie is Cool Runnings and I played in a reggae band for about a week. PEACE BE THE JOURNEY!!!
Posted by Matt Mac at 8:16 PM

Matt, I love your post. I would like the recipe for the marinade. I found the post when I tried to Google your Mom's blog. Aunt Barbie

Matt, I'm just posting again because I can't believe you didn't tell me about the stripper. I was reading your recipe and all I could think to say was YOU MOTOR BOATING SON OF A BITCH!
CARL