This Pretty Much Sums It Up 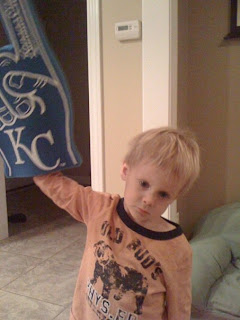 Even though he will hate me later in life for it, I'm doing my best to turn Carter (and eventually the twins) into Royals fans. If I am succesfull, it means they will most likely be rooting for a team that is one giant collection of suck. Last season we went to a late season game and Carter got to run the bases after the game, which was really cool. For some reason the other day he saw baseball on TV and told his mom that he wanted to run the bases with Uncle Matt. There was a good foot of snow on the ground on this time. Anyways, Carter called me and said he wanted to run the bases, I said we could do it this summer, but he should go find his Royals #1 foam finger. He immediately put it on and Katie took a picture for me. She swears he was happy and smiling, but somehow this is the picture that turned out. Combine the optimism of the number one finger and the look of depression on his face, and Carter at the age of 2 has summed up the feelings of Royals fans everywhere.

Thanks for giving me something to do at work again

One Commend
One Rule
One Corps

It was a beautiful blog, very interesting and very informative. I really enjoyed reading it. Keep it up.